Arturo Vidal Crashes Ferrari While Driving Under the Influence of Alchol

The latest DUI news comes out of Santiago Chile where Copa America soccer star Aturo Vidal has crashed his red Ferrari while driving under the influence of alcohol. It is important to note that DUI laws and rules are different for each state in the United States so they are definitely different for each country. By looking at the totaled red Ferrari it is quite obvious Vidal was going at a high rate of speed when he got into an accident. Below is a photo of the crash red Ferrari: 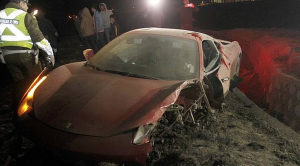 We will have to wait and see what happened with the questioning after Vidal was released from the hospital. The last we saw of Vidal he was been escorted out of the police station. As with most DUI and DWI charges it is going to take time for the process to conclude. This could be a painful process for the Copa America star that is in the middle of his season.

When it comes to driving under the influence most professional sports leagues have a policy in place. Whether it is a three strike policy or a no excuses policy will determine if Vidal is suspended for any of the upcoming games. When a star this big gets into trouble it remains news for weeks and months on end. We cannot expect to see a court date for the DUI charge for a few months. The fact that he is a huge star in Chile might push the court date up slightly but nothing will happen in the next few days. No matter how good of a car accident lawyer you work with, nothing can change the fact that Vidal acted in a negligent manner.